When you think about it, the humble corrugated cardboard box is a miracle of engineering. The simple yet amazingly durable carton carries countless products to their destinations — and corrugated boxes just keep getting better.

Part of the credit for this improvement goes to  recent advances in methods for testing their strength.

The introduction of the Edge Crush Test (ECT) has opened the door to boxes that are just as strong, but weigh less — thus don’t use as much material and energy to make.

How the Edge Crush Test Works:

Until recently, the only method available for measuring the strength of corrugated was the Bursting Test, also known as the Mullen Test. The Bursting Test, which is still used, is a good way to determine how well a box will withstand rough handling. The results are noted in pounds. So a carton that can take 125 pounds of force before it ruptures has a rating of 125#.

The pressing process establishes a peak load that the material can handle, measured in pounds per lineal inch of load-bearing edge (lb./in.). This final value is stated as an ECT rating. For example, a 125# Bursting Test would be generally equivalent to a 23 ECT.

Why Have Two Tests?

If you can draw an equivalency between the Bursting Test and the ECT, why have two tests? If one works as well as the other, what’s the point?

Simply put, the Bursting Test gives a specific rating based on the weight of the materials used to make the box. The ECT offers an “equivalent” rating, depending on the nature, rather than the weight, of the materials that make up the corrugated product. Box manufacturers have different methods for making corrugated cartons, and the formula used can affect how much bouncing about a box can withstand.

So, if you suspect your carton will be tossed around like a suitcase in the hands of airport baggage handlers, it’s probably best to go with the rating established by the Bursting Test or opt for a higher ECT rating.

On the other hand, under normal conditions, you might want to select the “equivalent” ECT-rated box. It could give you the strength you need while using less material, reducing weight and saving energy. It might also contain recycled materials, thus further reducing waste.

This chart shows an example of what this looks like: 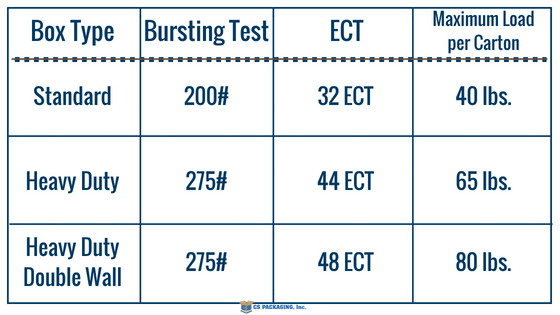 More Than Just a Box:

Who knew choosing a cardboard box could be so complicated?

It’s not, really. Packaging experts can help make the process quick and simple — even walking you through any Edge Crush Test details. It’s worth taking a little time to find out how to save more time and money by changing how you’ve thought about shipping supplies and learning more about your options.