Corrugated fiberboard or "combined board" has two main components: the liner and the medium. Both are made of a special kind of heavy paper called containerboard. Linerboard is the flat material, typically on the outer surfaces of the board but also on the inside for some structures, that adheres to the medium. Medium is the paper that is formed into arches or flutes on the single face and glued between the linerboard facings.

Architects have known for thousands of years that an arch with the proper curve is the strongest way to span a given space. The inventors of corrugated fiberboard applied this same principle to paper when they put arches in the corrugated medium. These arches are known as flutes and, when anchored to the linerboard with an adhesive, they resist bending and pressure from all directions. 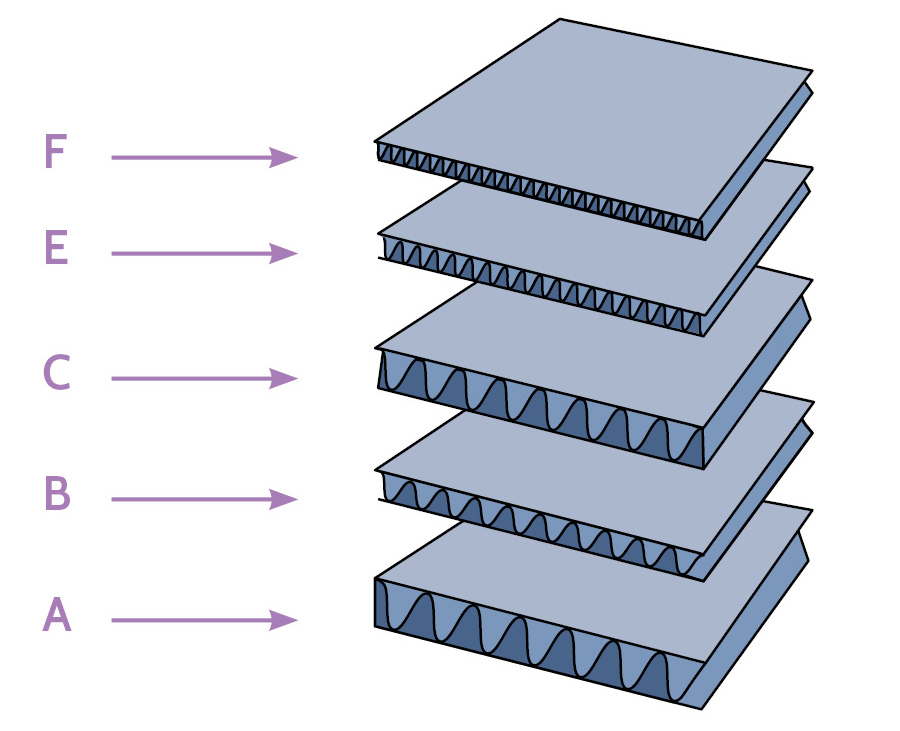 When a piece of combined board is placed on its end, the arches form rigid columns, capable of supporting a great deal of weight. The flutes act to keep the linerboard sheets separated, maximizing the bending rigidity of the board. When pressure is applied to the side of the board, the space in between the flutes acts as a cushion to protect the container's contents. The flutes also serve as an insulator, providing some product protection from sudden temperature changes. At the same time, the vertical linerboard provides additional strength and protects the flutes from damage.

Flutes come in several basic designations. Flutes with the same designation have similar size, but may have various flute profiles and number of flutes per foot within a given designation:

In recent years not only has there been a proliferation of flute profiles, but there has been increase in the variation in flute characteristic measurements for any given flute profile. Flute profiles will vary, sometimes significantly, because the corrugator rolls are manufactured to address a variety of aspects (such as speed, paperboard characteristics, economies, etc.).

The below illustration demonstrates four basic types of combined board that are most commonly created from linerboard and medium using the variety of flute structures:

Generally, larger flute profiles deliver greater cushioning and vertical compression strength, while smaller flute profiles provide enhanced graphics capabilities. Smaller flutes such as E and F also provide enhanced structural capabilities for primary (retail) packaging compared to paperboard (folding cartons). There is a good deal of variance across the industry in the range of flute sizes based upon the container characteristics that are desired for each application, as well. 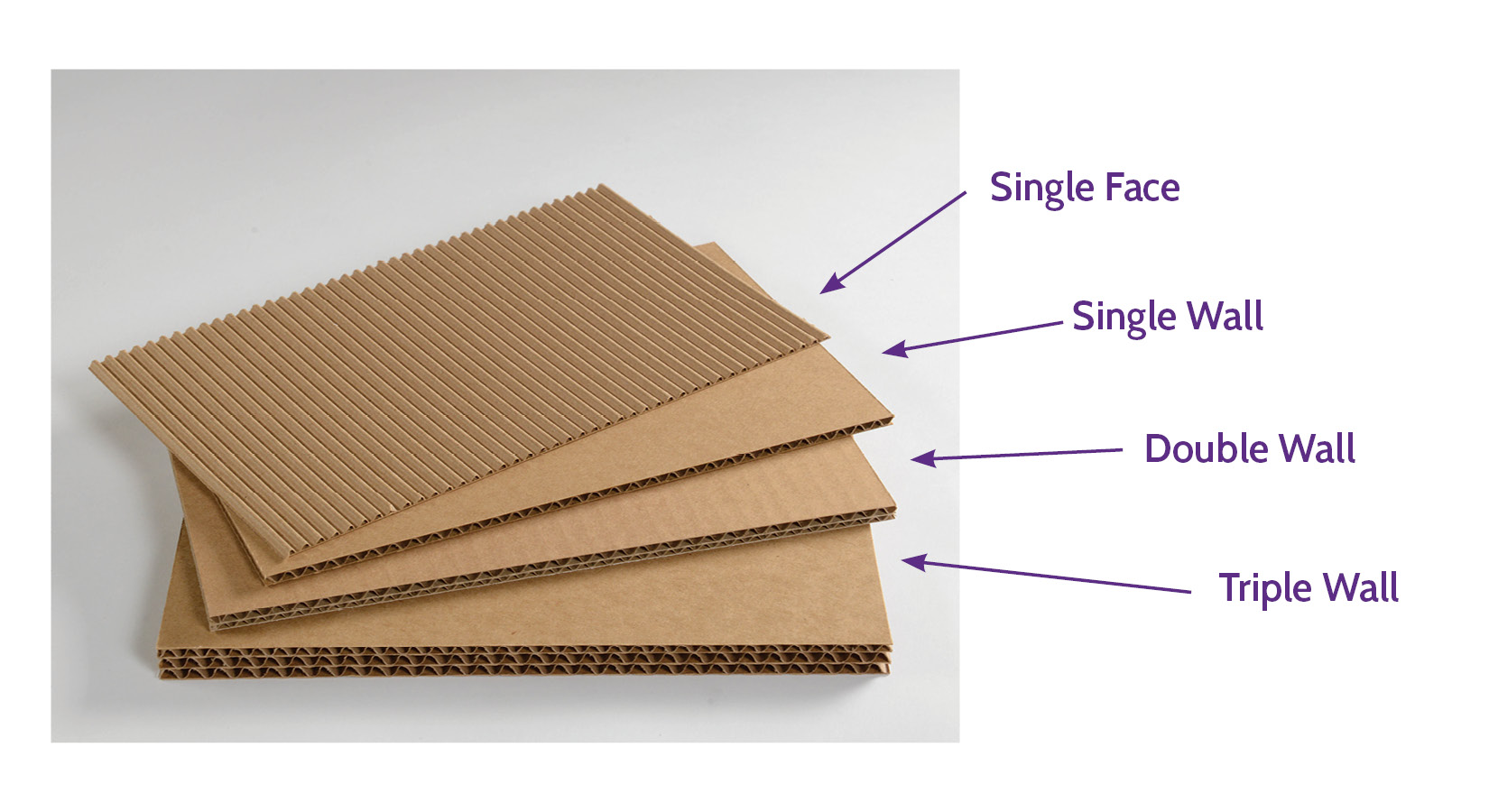 Most industries have a standard for measuring or describing the construction of a particular material. However, in the corrugated industry, there are two standards – the Mullen Test and the Edge Crush Test. This leads to quite a bit of confusion in the marketplace.

The Mullen Test, which has been used for many years, tests the bursting strength of corrugated board – how much pressure is required to rupture the wall of a piece of corrugated material. Boxes conforming to the Mullen Test standard are identified as 200# Test, 275# Test, etc. The higher the number, the stronger the corrugated box.

The Edge Crush Test, which was developed in the 1990’s, measures the stacking strength of corrugated board – how much top to bottom pressure a box can withstand before crushing. Boxes conforming to the Edge Crush Test standard are identified as 32ECT, 44 ECT, etc. Again, the higher the number, the stronger the corrugated box. For most general purpose applications, 200# Test and 32ECT are interchangeable; however, the board comprising 200# Test material is slightly heavier than the 32ECT equivalent, making it somewhat more expensive. 32ECT boxes have become extremely popular since the Edge Crush Test was introduced, partly due to cost, and partly because stacking strength is a more meaningful measure of how a box will perform in the field. 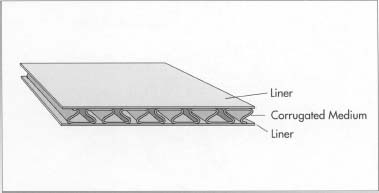 Boxes can be used to ship everything from apples to washing machines. By changing the design of a box, combining layers of corrugated or adding interior packaging, a corrugated box can be manufactured to efficiently ship and store almost any product.

Many standard box styles can be identified in three ways: by a descriptive name, by an acronym based on that name, or by an international code number. The numerical code system, known as the International Fibreboard Case Code, was developed by the European Federation of Corrugated Board Manufacturers (FEFCO) in collaboration with the European Solid Board Organisation (ESBO) to avoid confusion when communicating in different languages.

Below are some common box style categories and designs. Keep in mind there are many other standard styles from which to choose. In addition, corrugated boxes can be custom designed to meet the specific needs of any box user. A manufacturer's representative will have more information about additional box style options. 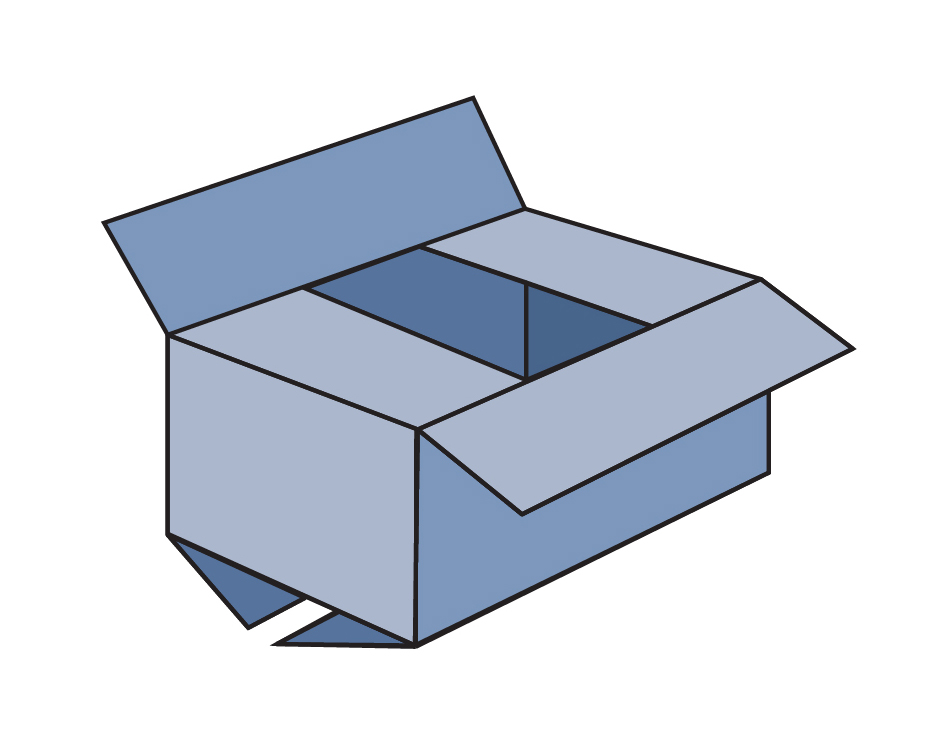 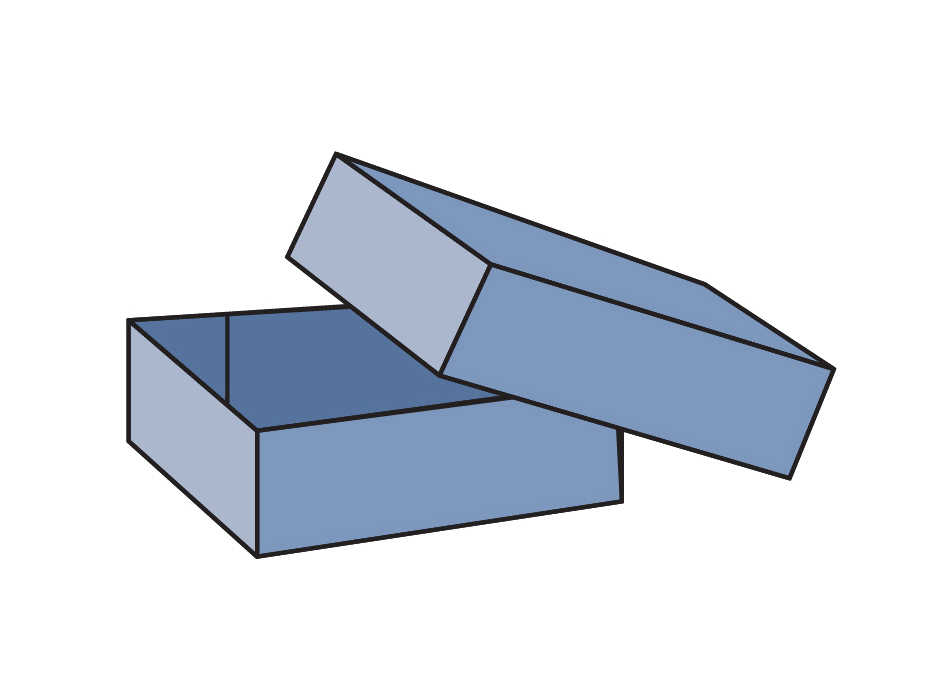 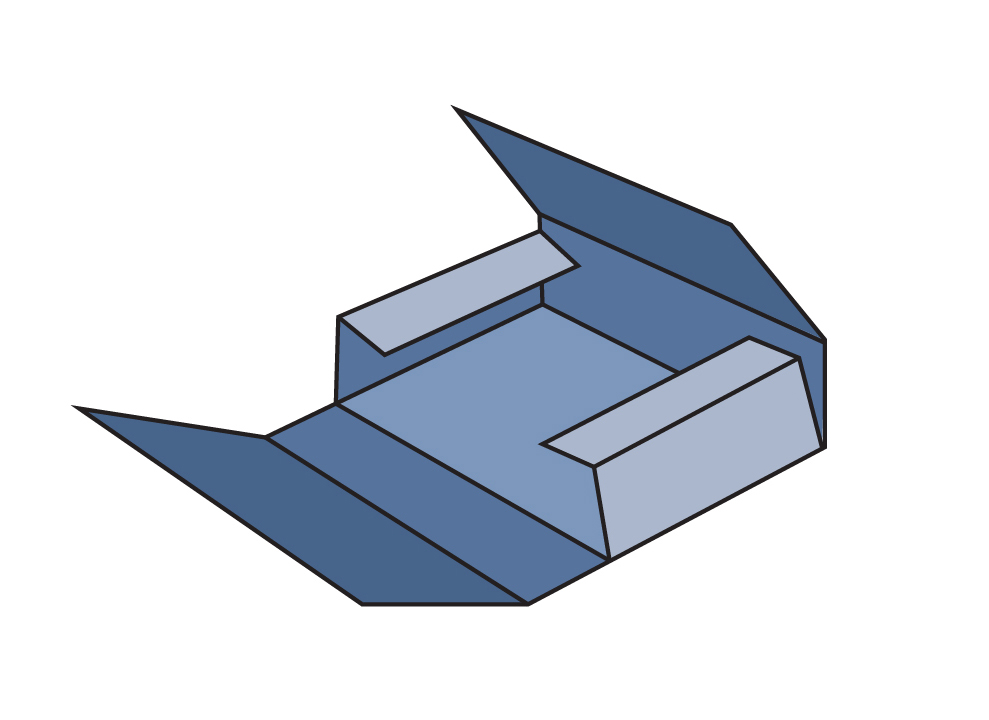 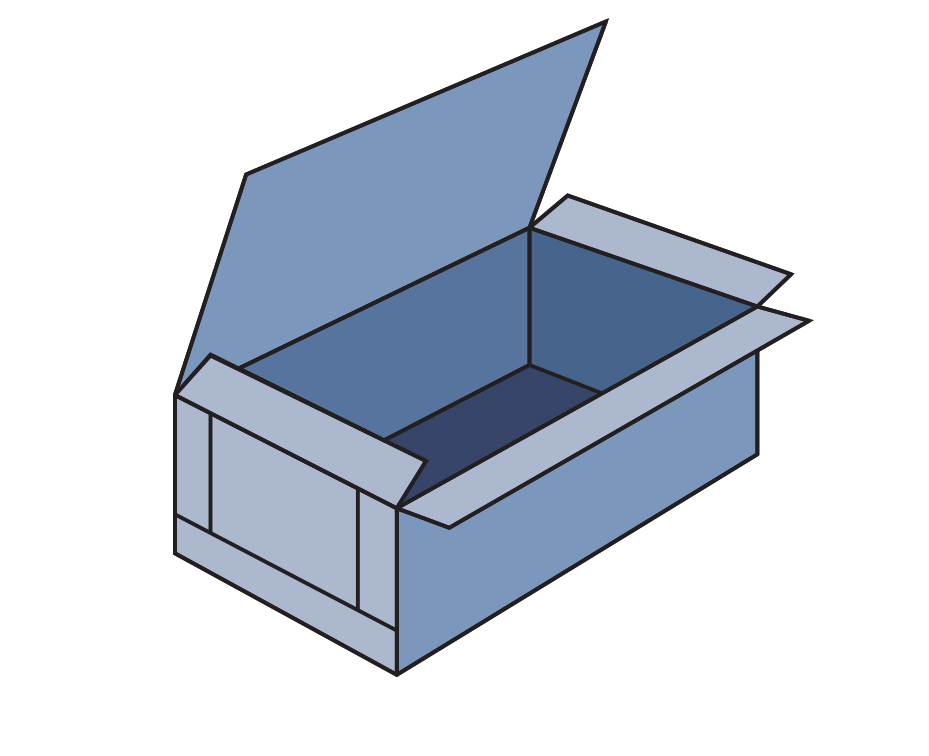 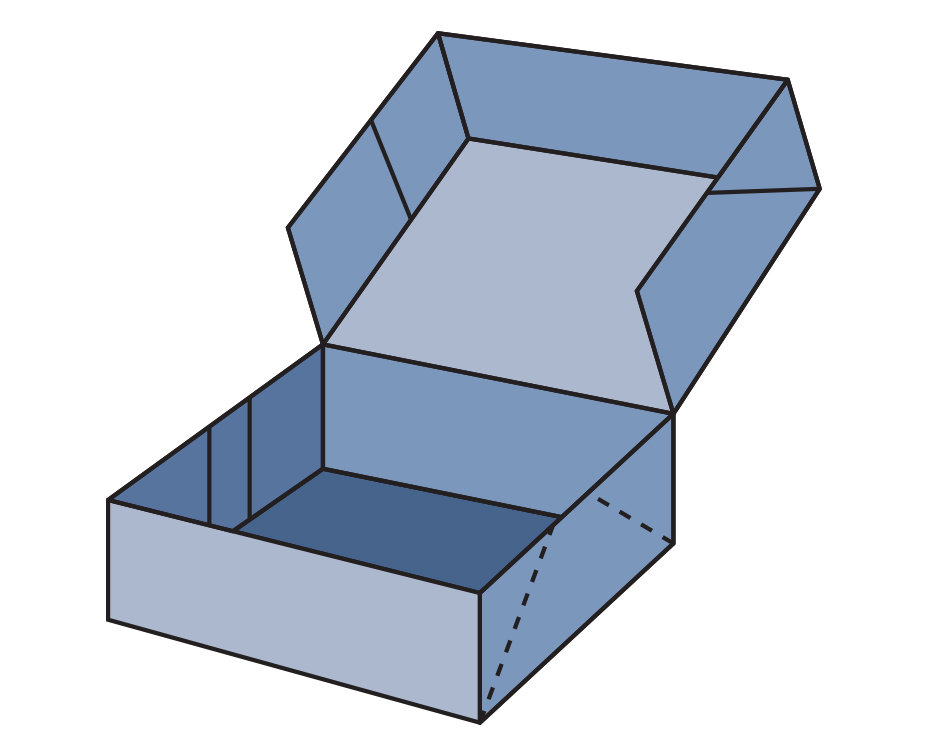 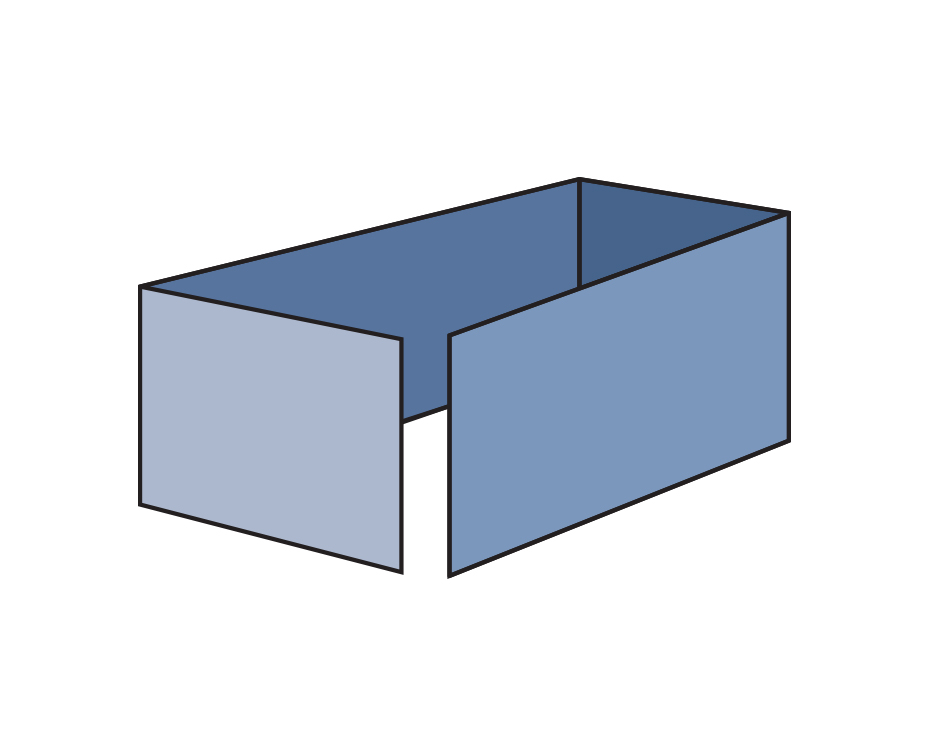